Every now and then, a collector comes across a piece he’s been hoping to find for years. Decades, even. Renowned White House China collector, Raleigh DeGeer Amyx, recently had such an experience, when he was able to acquire an extraordinarily rare plate from the original Rutherford B. Hayes White House China service. The new acquisition, produced in 1879, is an exquisite 8-1/4” fish plate.

Every President’s Official White House China has been beautiful in its own way, but there are a few patterns that stand out, even among this prestigious group. One of the most exceptional White House China collections was commissioned by President Rutherford B. Hayes and his First Lady, Lucy. The porcelain is not only spectacular in its quality and variety, what few pieces of the 1879 variety remain are extremely rare.

VIEW OF THE BACK OF THE RUTHERFORD B. HAYES FISH PLATE - NOTE THE SIGNATURE CYPHER IN THE 6 O'CLOCK POSITION - PART OF THE RALEIGH DeGEER AMYX COLLECTION
SEE MORE EXAMPLES OF OFFICIAL WHITE HOUSE CHINA

Many things about the Hayes China make this service unique in the true sense of the word. Among its distinctive characteristics is the fact that most of the plates and serving pieces are not round. Rather, the dishes themselves are works of art, shaped to frame the American artwork painted on them. The latest addition to the Raleigh DeGeer Amyx collection is round, but with a beautifully scalloped edge that gives the plate definition and creates its own style of “frame” for the artwork.

In fact, from the artwork we see that this 1879 plate is, indeed, a scallop shell. But there is more. Fittingly, since this is a fish plate, it features a dramatically rendered ocean fish, along with a flower bud that draws the eye downward on the plate.

CLOSE-UP OF SIGNATURE CYPER AT 6 O'CLOCK POSITION ON THE HAYES FISH PLATE VERSO - ORANGE, TURQUOISE AND BLACK WERE USED TO FORM THE INTITIALS "TH" (Theodore Haviland) AND THE "1879" ORDER YEAR - THIS RARE DISTINCTION APPEARED ON THE WHITE HOUSE INITIAL 1879 ORDER ONLY - PART OF THE RALEIGH DeGEER AMYX COLLECTION

What collector wouldn’t want to own something so impressive? But this plate is not only stunning, it is the genuine article – a piece of the original 1879 Rutherford B. Hayes Official White House China order. We know that when we turn the plate over to view the back side, or verso. There, in the “six o’clock” position, we see the distinguishing mark that authenticates this plate. The orange, blue, and black cypher says “Limoges Haviland & Co. and depicts the initials TH (for Theodore Haviland), interlocked with “1879.”

The story goes like this: Haviland & Company hired the famous artist Theodore R. Davis to design the Hayes China, which includes 130 different wildlife motifs. Every piece was entirely hand-painted. It cost Haviland so much to produce the 562-piece order that they lost money, so to make up the loss the company re-issued a limited number of pieces for sale to the public, as well as for supplemental White House orders. The only difference was that plates manufactured after the original 1879 order do not bear the “TH 1879” cypher, although they do carry the presidential eagle seal on the verso. 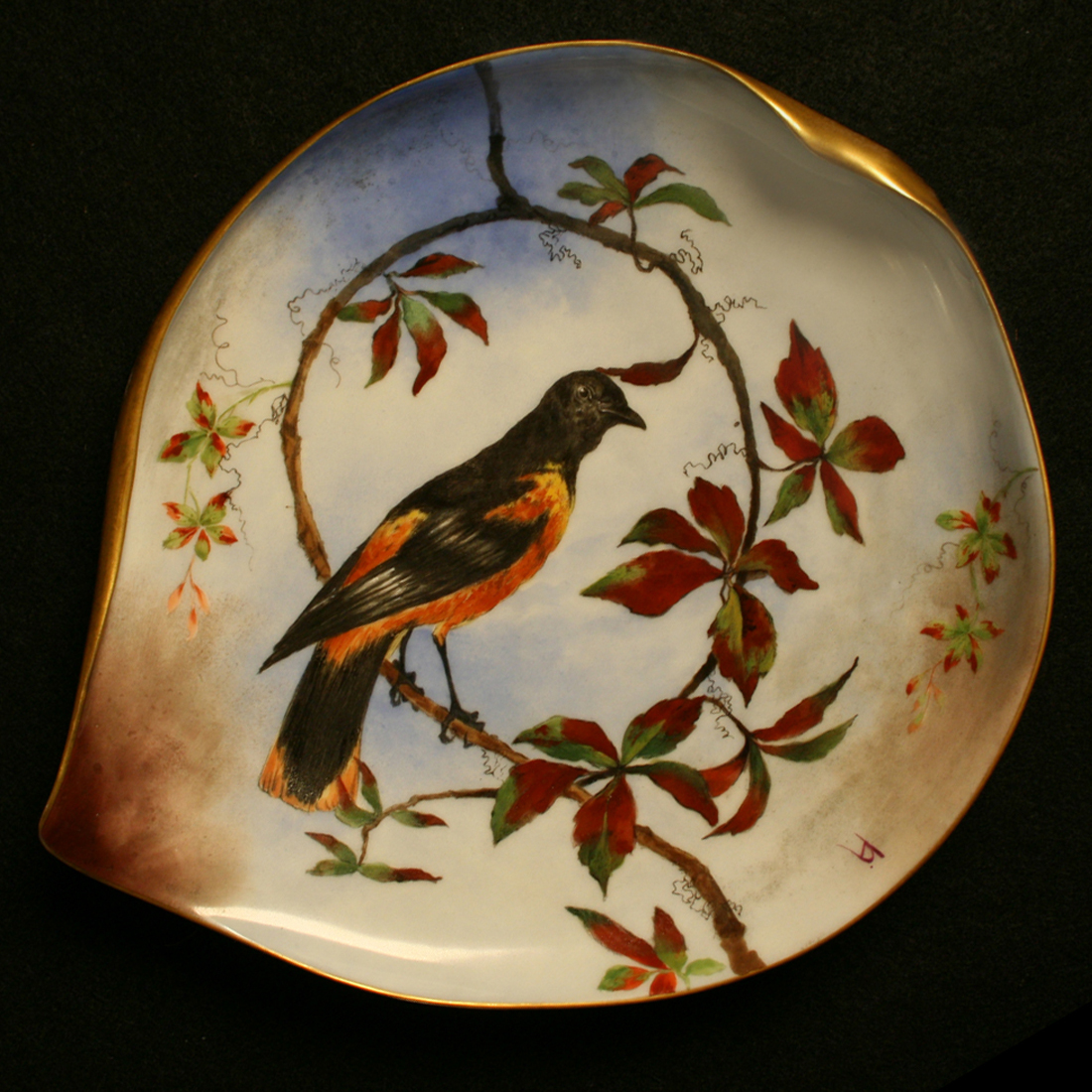 Mr. Amyx’s White House China collection includes several other supplemental Hayes fish plates. He says it’s “not so hard to find fish plates from the supplemental orders.” But now, after searching for more than three decades, he has finally made a very special addition to his collection with the 1879 fish plate. For him, it is “a big deal.” He says the texture, depth, and perspective of the hand-painted artwork cannot be truly appreciated in photographs, only with the human eye.

As a collector, he also appreciates the value of the fish plate. Hayes China from the 1879 order is so rare, its value is about eight times that of pieces from supplemental orders.